Australia was part of a milestone in space discovery when the Japan Aerospace Exploration Agency’s (JAXA’s) Hayabusa2 mission returned the first ever sub surface asteroid samples to Earth in December 2020.

The Australian Space Agency assessed JAXA’s application for the authorisation of a return of an overseas-launched space object (AROLSO) for the Hayabusa2 sample return capsule under the Space Activities Act 1998.

The capsule returned to Woomera Prohibited Area (WPA) in South Australia with samples from the asteroid Ryugu, while the Hayabusa2 spacecraft re-joined its interplanetary transfer orbit.

Returning a space object to Australia

The return of space objects to Australia is regulated under the Space (Launches and Returns) Act 2018, which commenced on 31 August 2019.

The Australian Space Agency is responsible for regulating Australian space and high power rocket activities, and international arrangements affecting space regulation. Activities that need approval under the legislative framework include returning a space object to Australia.

The Agency provided advice to the Minister on whether the AROLSO met the requirements of the 1998 Act.

Shoal was engaged by the Australian Space Agency to conduct an independent assessment of the AROLSO application submitted by JAXA for the landing of the Hayabusa2 Sample Return Capsule in the WPA. Shoal was in a unique position to conduct this work, after being awarded the Australian Space Agency’s first technical services contract to revise the Flight Safety Code and Maximum Probable Loss Methodology including the development of a Maximum Probable Loss Estimator Tool.

To support the safe return, Shoal conducted an initial assessment of the application against the 1998 Act, and associated framework, and guidelines. 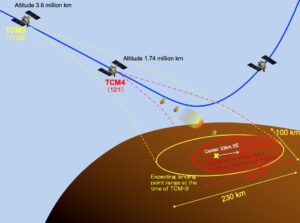 Image supplied by JAXA: The yellow ellipse shows the calculations based on the position of the spacecraft at TCM-3 and the red indicates how this has been refined from the positional update after the TCM- 4 manoeuvre on 1 December 2020.

Shoal’s Next Generation Flight Analysis Capability was used to develop a representative model of the Hayabusa2 return capsule. This unique capability also enabled Shoal to perform re-entry flight-path analysis that included modelling different failure modes and assessing their impact on the risk to public safety and property.

A detailed quantitative assessment of the Hayabusa2 Risk Hazard Analysis was performed to ensure the return complied with the launch safety standards outlined in the Flight Safety Code (2001).

Analysis was also undertaken to support the Agency, the Commonwealth Return Safety Officer and JAXA in decision making during the series of Trajectory Correction Manoeuvre events.

A key challenge was the development and assurance of sufficiently detailed models to represent the hypersonic re-entry of the Hayabusa2 sample return capsule. This had to be done for both nominal and failure conditions, accounting for uncertainties in key environmental and vehicle design parameters. These challenges extended across all mission phases from the capsules re-entry starting point, which began in space entering the atmosphere at hypersonic speeds, through to the staging of heat shields, and final descent under parachute with realistic wind dispersions.

Image supplied by JAXA. An illustration of the trajectory modelling undertaken for the Hayabusa2 mission.

Images supplied by JAXA. Left fireball in the sky from Coober Pedy. Right, Re-entry capsule landing in Woomera on 6 December, 2020.